How quickly yet another year has flown by. It’s that time of the year where I look back at what’s happened over the past twelve months, then try and say something intelligent about the future direction of the property market over the next year.

As always, 2014 was an interesting year for the property market. I’d sum it up as “the year when policy finally worked.” In 2013, despite seven rounds of cooling measures and a property tax hike, the residential property market simply shrugged it off for the first three quarters, resulting in the URA Property Price Index (PPI) clocking a positive 2.0% move.

TDSR – the straw that broke the property market’s back

But the figurative straw that broke the camel’s back was the MAS’ Total Debt Servicing Ratio (TDSR) framework introduced at the end of June 2013, which significantly limited the ability of buyers to lever up and buy property despite the signs pointing to an overheated and overpriced market. Really, the MAS was just trying to save buyers from themselves (sometimes there are benefits to living in a nanny state).

This final straw then led to four consecutive quarters of decline of the PPI from 2013Q4 to 2014Q3 for a total decline of 3.9% over this period. This figure likely understates the magnitude of the decline as we know that developers have been offering all kinds of incentives (e.g. tax rebates, renovation vouchers etc.) to get buyers to bite without having to lower the headline price.

How much further will the property market fall?

Looking at monthly property indices such as the SRX Property Index (SPI) and the NUS Singapore Residential Price Index (SRPI) suggests that the Fourth Quarter of 2014should to continue to be weak, although the decline is likely to be small.

And despite the warning, threatening and finally pleading of the property developers and agents, the government is right – the correction of property prices so far has been very mild. 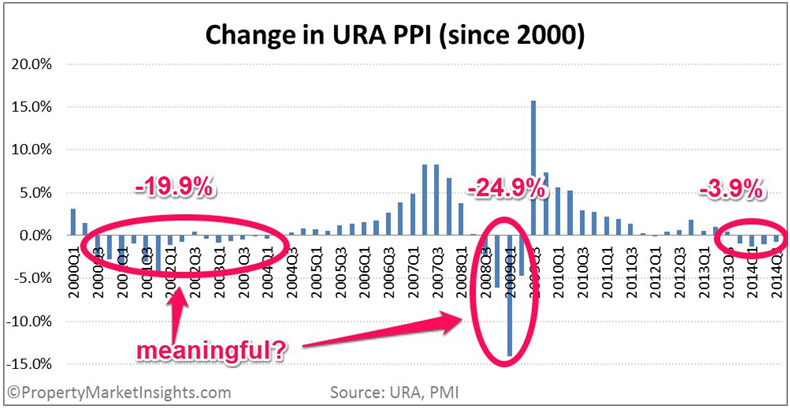 The million dollar question is – what does the government think a “meaningful” correction is? It’s important because they’ve indicated that the property cooling measures are here to stay until such a correction has occurred.

We can get some clues from the previous two corrections that occurred from 2000 to 2004 and then more recently from 2008 to 2009 during the Global Financial Crisis. During those downturns, the URA PPI corrected by 19.9% and 24.9% respectively. So if I had to hazard a guess, I’d say we’d have another 10 to 20 percent more downside to go before the government would deem the correction to be “meaningful” and start easing some of those measures.

There are three reasons why the current market weakness is likely to continue into 2015 and beyond.

First, the HDB Resale Price Index (RPI) has continued to decline and has been weaker than the URA PPI since 2013Q2.A doubling of HDB prices since 2005 created a “wealth effect” that supported mass market prices as HDB flat owners could sell their unit at a high price and upgrade to a private condominium.

Now that HDB prices are falling, this effect will shift into reverse gear, where HDB owners find it difficult to sell their flat at a good price, thus sapping demand from the mass segment of the market, which incidentally has been the strongest segment. 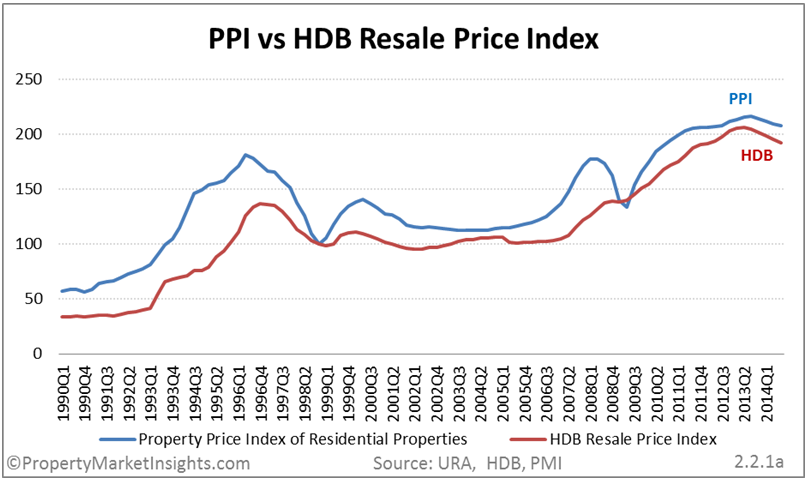 Second, record upcoming completions are likely to put pressure on both property prices and rentals, especially coupled with slower expected population growth as the government continues to tighten the inflow of foreigners coming into Singapore due to the locals’ unhappiness. Conspiracy theorists posit a loosening of the foreign talent spigot post a surprise 2015 General Election, but really, who knows?

Based on URA data, there are close to 75,000 units of private residential properties that will be completed in the next few years. Looking at the breakdown of supply, 2015 and 2016 will see completions of over 20 thousand units per year. This is nearly twice the yearly average of fewer than 10 thousand units per year between 1996 and 2012. 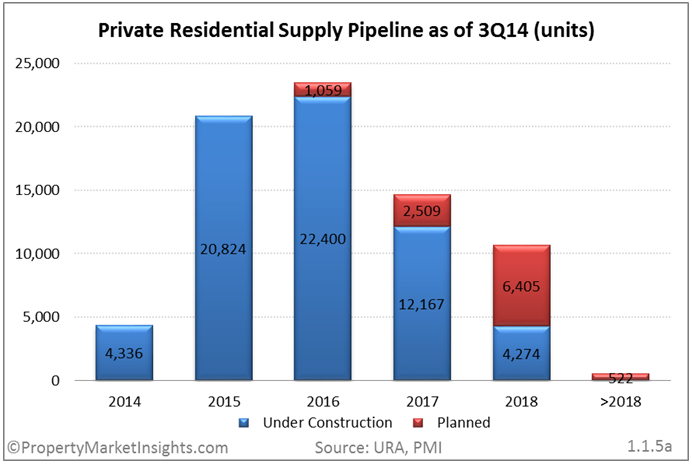 And if we add on the completions of public housing, the upcoming supply tsunami looks daunting.

Finally, we should keep in mind that the root cause of the buoyant property prices is the protracted low interest rate environment after multiple rounds of Quantitative Easing (QE) by the US Federal Reserve post the Global Financial Crisis. This has propped up the prices of most yield-based assets, including property. While the Fed has indicated a gentle pace of QE tapering, the market reaction to any significant tightening of liquidity could be stronger and more violent than people expect. 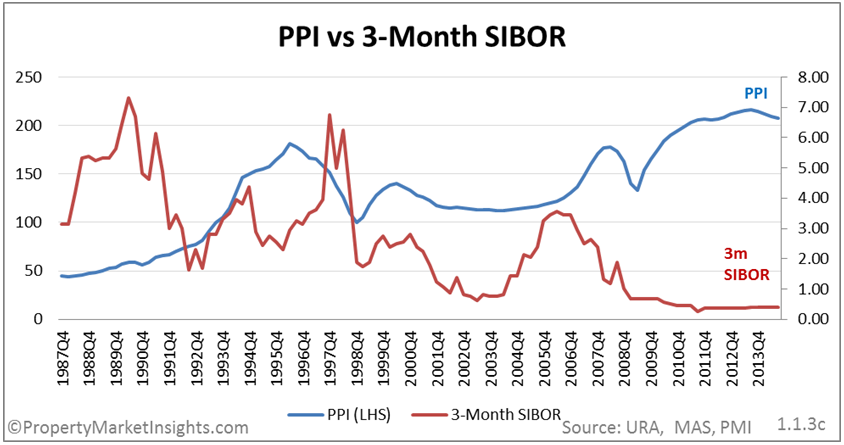 And even if interest rates do not shoot up right away, borrowing costs can still rise as banks charge a higher margin (SIBOR + X%) to give themselves a buffer against rising interest rates and greater mortgage defaults.And when borrowing costs rise, the stress on heavily leveraged buyers will go up, and the attractiveness of property itself as an asset class also decreases as the net cashflow it provides falls. This will be exacerbated if rentals are also under pressure at the same time.

I’ve talked about this before, but I think many property buyers are still blasé to the impact of rising mortgage rates (whether from rising interest rates or banks raising their lending spread) on their ability to meet their monthly payments, so I hope to make it more concrete by using an example.

Let’s take the case of the Lees, a young professional couple who bought their dream condo for $2 million (before the TDSR rules came into effect). They took an 80% loan ($1.6 million) with a 30-year tenor. With the current low floating mortgage rate of 1.2%, their monthly payment is $5,294, a manageable 50% of their total household income.

Fast forward a couple of years, when the Fed has raised rates and mortgage rates in Singapore have returned to their long term average of around 4%. The monthly payment will get re-priced upwards to $7,639, and now accounts for a hefty 72% of their household income (assuming no pay increments). This represents a 44% increase.

The Lees are starting to sweat, and are barely making ends meet. And Lord forbid if either of them were to lose their job. Not to mention that this rise in rates is coupled with weak rentals and record completions, and property prices falling every quarter.

Have you imagined such a scenario happening to you?

So what should buyers and investors do?

I do not like making forecasts about when or how much property prices will fall, because I believe the exact timing and magnitude of property price movements is dependent on too many unknowable events. Instead, I prefer to base my property investment decisions (there are different considerations if you are buying for own stay) on my analysis of where we are in the cycle and what has historically been the best actions to take at each point.

Members of Property Market Insights will know that we are currently in the Early Bear stage of the Property Market Cycle Model. This means that the best thing to do is to sit tight and wait for further correction before entering. The time to buy will come when we enter the Late Bear and Early Bull stages of the market. You might have to wait for years, but it’s much better than giving in to the pressure to buy now at a high price and then see your life savings get wiped out, don’t you agree?

Here’s wishing everyone a Happy New Year and a Healthy and Wealthy 2015!