Although Singapore runs a surplus almost every election cycle, this surplus does not include land sales. Hence Singapore runs a much larger “surplus” than reported in the budget.While the IMF treats Land Sales as revenues, Singapore’s Ministry of finance treatsland sales as Capital Receipts. What this means is, any land sales are added into Singapore’s past reserves as capital gains/losses.

According to the URA, from Jan 2011 to Sep 2015, the proceeds from just Commercial, Hotel, White, Industrial, Residential (excluding landed housing) and other sites amounted to some $24 billion in land sales. And this has not included land sales by the HDB for EC, BTO and DBSS sites.

On the other hand, the actual demand over the past decade for private non-landed homes averaged only 8,000 units annually, based on the change in occupied stock for non-landed homes.

As for sales, between Jan 2014 to Dec 2014, there were only about 8,000 units of new salePrivate residential units being transactedwith a subsale of 500 units (including EC).

As of 2Q15, there were some 24,435 units of unsold uncompleted residential units versus 64,437 (Non-landed Private residential – Excluding EC).

In short, this means there are 40,002 of unsold private non-landed residential units in the pipeline competing to be sold.

Who will be staying in all these upcoming units?

From 2005 to 2014, Singapore’s population increasedby 1.3million and the housing stock increased by 171,870 units. This indicates 7.58 people per household. This is more than double the average Singaporean’s household size of 3.5 to 3.6. Part of the reason could be attributed to workers staying in dormitories, domestic helpers staying with their employers, or room rentals. 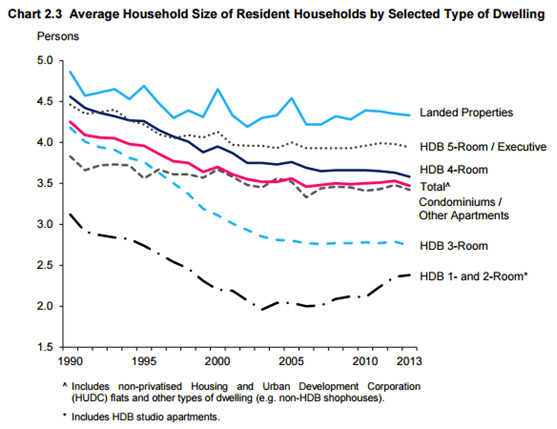 Can foreigners fill up these units?

Based on 7.58 people per household, 30,000 vacant units will need about 227,000 in population growth (with the same foreigner mix) within the next three to four years to fill them up, either to rent and stay or simply to buy and stay.

Foreigners will find it costly as the Additional Buyer Stamp Duty (ABSD) is punitive at 15%. Except for the ultra-high-income expatriates, the likelihood of them being able to save an additional $180,000 for a $1m property to pay stamp duties is low. Many foreigners will most likely end up renting a place in Singapore, supporting the rental market.

Will homeowners experience negative equity levels in the next 5 years?

Singapore’s housing prices have been gradually dropping at around three to five percent a year since 2014.

A property bought at $1.25million with a loan of $1million (at an 80% Loan ToValuation) would be worth $1m in five years. The loan balance will be ~$870,000 if interest rates stay at the same level. We would have a property valued at $1m and loan outstanding of $870,000. Loan to Value has increased to 87%, but is still not in the dangerousnegative equity zone, as long asthe economy is not severely impacted and interest rates increase moderately.

Why help the property developers?

While we could argue that developers only have themselves to blame for bidding high prices for land only to be stuck with unsold stock, developers are merely proxy “tax” or “capital receipts” collectors on behalf of the government who is the largest landlord and controls immigration policies.

Perhaps the root cause is the over-eagerness of the Singapore government to release as much land supply as possible during attractive pricing to fill the reserves while constricting supply during periods of low land prices, when what was needed was a constant and measured supply to smooth out market volatility.

The government should allow developers to delay their completion of the development without incurring penalties so as to shift some of these property supply to the later years in 2017, 2018, 2019 and beyond. Orthey could allow developers to return the land to the government andindefinitely shelf the building plans with a penalty payable based on the number of years delayed, or simply cancel the contract outright with a penalty. This would enable developers to cut loss and move out of this difficult situation.

The government should act to solve this problem

As property prices are dropping and rentals weakening at the same time, there is a need to solve the vacancy challenge.

The Singapore government is keen to bring in a higher population to solve many problems, but with the weakening economy, employment growth may be muted for foreigners as well as Singaporeans and PRs.

At the very least the ABSD needs to be reduced for foreigners as well as for Singaporeans and PRs buying their second or greater property as long as they meet the TDSR guidelines.

The TDSR is a good policy and should stay to ensure financial prudence. However,the TDSR is artificially reducing the demand for property not due to its limitation of indebtedness, but due to the huge paperwork burden it places on the property buyer just for the bank to check and comply with theTDSR. This includes obtaining car loan statements, credit card statements, etc. Banks and financial institutions do not necessarily print and deliver monthly statements and calling their hotline will set you back by thirty minutes, while printing a statement will cost you $20.

Financial institutions are not helping to provide the timely release of statements required for housing loan applications.Perhaps the MAS could coordinate a bureau where such information are shared in a better manner so that banks can check with a central bureau to obtain the information they need instead of burdening the buyersto fulfill the onerous paperwork requirements.A suggestion could be that a Buyer simply signs an authorization form to a bank to allow a bank to seek the information from the other banks to retrieve the statements, freeing up the burden on the home buyer.

The MAS could also mandate all financial services providers to provide monthly statements within three days upon a request by customers who require this for bank financing purposes.

The TDSR could potentially be relaxed for people with high income and/or small business owners to allow them greater flexibility in leveraging and having access to funds to create employment.

Developers need help too. Going forward, the government could make known its plans in immigration and regulation pertaining to any piece of land. By providing more transparency on the land parcels to be released five years ahead of schedule, developers will then know the five year land supply forecast and bid responsibly.

End consumers will also likely end up with property prices that do not swing wildly. The government has the Reserves to do it and should not simply restrict land supplies to hold out for the highest prices, only to release massive parcels of land when it hit the price sweet spot, as this simply becomes a land tax which ripples across industries, raising business costsand making Singapore uncompetitive and home prices unaffordable.

By Paul Ho, holder of an MBA from a reputable university and editor of www.iCompareLoan.com, Singapore’s first Cloud-based Home Loan reporting platform used by Property agents, financial advisors as well as Mortgage brokers. 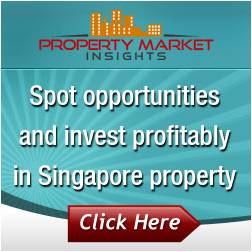